The Children's Museum and Preschool will be closing at 12:30 pm on Wednesday, January 5, 2023. We apologize for the inconvenience.

How did you get involved with The New Children’s Museum?

I had my 5th birthday party here. That was one of the first times I came to the

Museum and then right after that I started coming to camp every year until I was too old.

When I was 14, I started volunteering. One day, I wanted to visit the Museum, see how it had changed since we’d been gone. My brother and I went in and Jen Parker (Visitor Services and Volunteer Coordinator)was standing there and she had volunteer applications in front of her. I asked her if the camp was still around and she said yes. I decided to volunteer. I volunteered for 3 years with the camp and in the King Tut exhibit, too. I finally became an educator my fourth year. This year. 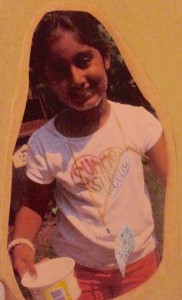 Kanwal as a young camper.

Is your family involved with the Museum?

My older brother was a co-camper with me and he also wanted to volunteer so we both started volunteering the same year. He then became a camp counselor. He went off to college but still occasionally visits with us during the summers. The campers especially love an ongoing joke about oranges that we had heard when we were campers here. Actually, one of our campers told us last year that they want to come back to work as a counselor someday so they can tell that same joke.

What was the joke?

Oh it’s a really long joke. You’ll have to come to camp. (laughs)

What is the best part of working at the camp? 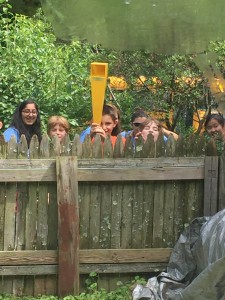 Kanwal and campers do some “secret” spying during Mystery at the Museum week.

As a kid, one of my favorite camp weeks was Crime Week so the first week I wanted to do as an educator was a similar theme: Mystery at the Museum. I wanted to make that week just as exciting for the campers as it was for me.

I have enjoyed coming up with activities and experiments for the kids to do because many of them are things I had done as a camper here. I’ve been able to bring back activities that we enjoyed a generation ago.

I feel like kids take a lot away from camp– both socially and educationally. I know I did—and still do! I credit my goal of becoming a pediatrician to the campers I have encountered and my realization that I thoroughly enjoy working with children.

So you have sort of a legacy here? Passing on your knowledge to the next generation.

One of the educators I had as a child was Dan Butterworth, the famous Dan Butterworth (laughs) and I’ve now had the privilege of teaching his son, Craig. It’s truly given me insight to how remarkable the museum is for encompassing multiple generations of learning.

After this summer of camp, what comes next for you? 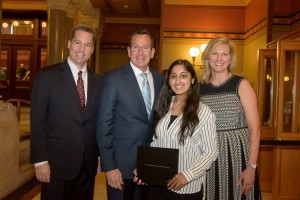 Kanwal received a scholarship for her volunteer work at the Museum.

In the fall I will joining Boston College’s school of Arts and Sciences as a Biology and Political Science double major, with the hopes of going to Medical School afterwards. I credit much of my interest in science to The Children’s Museum.

I am also planning to work as an EMT at BC. I have actually done a lot of first aid work for the camp. One of the campers even called me Dr. Kanwal. It was adorable.

We know the Museum is a large part of your life, but when you’re not at the museum…what do you do?

I play tennis. I’m a black belt. After camp as a kid I would go straight to karate.

Actually, my brother and I have a pet chinchilla because of the Museum! We would always look at the chinchillas in the sanctuary and ask our counselors if you could get them as pets. Then, after our first year of working here, we went to the pet store one day after camp and bought one! We named her Fia after a joke we had made with the kids that day.

What’s your opinion of the Museum now that you are a (young) adult?

The Museum has found the perfect balance of education and fun, in a way that parents and children can enjoy equally. It historically holds a significant spot in Connecticut because of its range of animals, new exhibits, and welcoming staff.

Any memories of Conny?

After every game in camp we would go and get sprayed by Conny outside. We would race to see who could reach him first. Then, when we got back inside, we would pretend like we were inside a real whale.

Now pretend like you were writing a message in a birthday card to Conny. What would you say to him?