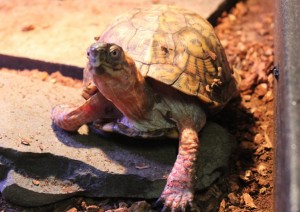 Bobby came to The New Children’s Museum on July 16, 2010. At the time he was donated, he was estimated to be about 30 years old. His red eyes and concave plastron (the bottom of the shell) indicate he is a male box turtle.

One way to tell the difference between a turtle and a tortoise is how they walk. A turtle drags its plastron when it walks, while a tortoise lifts the plastron up off the ground. Walking in the footsteps of great artists like Picasso, Bobby has developed a new hobby…. PAINTING! The most renowned artist in The Wildlife Sanctuary, Bobby the box turtle creates his masterpieces by dipping his feet in different colored paints and then “feet-painting” across the canvas. An example of his artwork can be seen in the Museum’s snack area.

Since 1999, Roaring Brook Nature Center has been conducting a survey on eastern box turtles in Canton, Connecticut.  Box turtles found in Canton are brought to the Nature Center where information is recorded as to when and where the turtle was found, the weather, and information about the turtle’s carapace length, weight, gender, etc.  From 1999 to 2014,  a total of 111 box turtles have been recorded as part of this study including ten recaptured turtles. If you are  hiking through Werner’s Woods or one of the many other hiking trails in Canton and you find an eastern box turtle, please bring it to Roaring Brook Nature Center. With your help, we can expand the study’s database. By documenting where these remarkable creatures are living, we can better protect their homes and habitats.

This map depicts all recorded turtles to the present day. 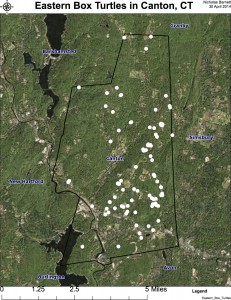