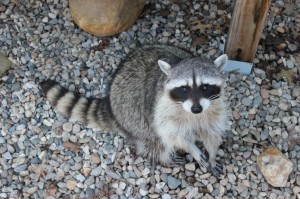 Loki has been causing mischief at The New Children’s Museum since October 7th 2009. At the age of 17 months he was relocated from Wildlife Encounters Zoo in Rochester New York to The Wildlife Sanctuary in West Hartford, Connecticut. In his time here he has proven to be quite tricky and resourceful. Being an adept climber, whenever animal caretakers would attempt to enter his cage to clean and feed him he would climb right up the cage and either steal the lock, the keys or both and run back into his den and hide them. He’s also taken up the habit of ‘reshingling’ his roof by ripping off the singles on top of his enclosure (unfortunately as of yet he has not mastered the skill of putting on new shingles). As troublesome as he can be, everyone always enjoys watching him eat his grapes, which are his favorites, and chatter away when he finds a new toy.