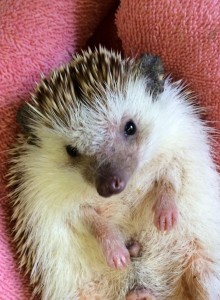 Our prickly friend Nemo joined The New Children’s Museum in March of 2013 when he was about one year old. He had bounced around a couple of different homes until being donated to The Wildlife Sanctuary so he could be used as a program and display animal. African pygmy hedgehogs are primarily nocturnal animals and run quite long distances at night, which is why there is a wheel in his cage in which he can run.