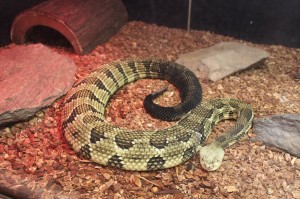 On October 29, 2003 The Department of Environmental and Energy Protection confiscated Roadhouse from a home in Hartford, Connecticut. The owner of this rattlesnake claimed that at the time she was approximately 27 years old. The possession of timber rattlesnakes as pets is illegal because they are considered potentially dangerous.

The timber rattlesnake is one of Connecticut’s two venomous snakes. It is not an aggressive species and it is more likely to slither away then to strike. If the snake feels particularly threatened it will rattle its tail, which makes a sound similar to a baby rattle, to warn predators aware of their presence. Timber rattlesnakes are isolated to very small areas in Connecticut, making them a rare occurrence to encounter.