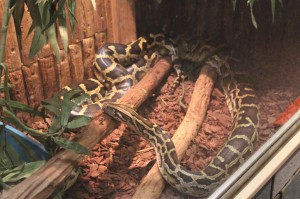 On July 14th, 2008 the Wildlife Sanctuary staff received a call from the Wildlife Control Services of West Hartford because one of their officers had just caught a large constrictor that had been found in a home in New Britain. The occupants of the house did not own the snake and were quite alarmed when they discovered the 9 foot , 30 pound burmese python in their home. He is aptly named Stanley because the residence he was found in was located on Stanley Street in New Britain.

Although burmese pythons are an invasive species in the Everglades due to accidental introduction, Stanley did not slither his way up from Florida into this New Britain home. Unfortunately, there is a large market for exotic pets and many people purchase these animals when they are small and easily handled. They fail to take into account how large the animal will get or how long it will live. The likely case is that someone purchased Stanley when he was small and as he got bigger they realized that having a burmese python as a pet is not such a great idea. Since it is illegal to have a burmese python as a pet without proper licensing provided from the state, when someone doesn’t want one as a pet anymore they do not have a lot of options. If they cannot find it a home with someone they know usually their next option is releasing it into the wild, even if it is not the right habitat. This is detrimental to both the animal itself and ecosystem in which it is released.

Stanley’s story of his arrival at The Children’s Museum was reported in The Hartford Current, which you can see below. 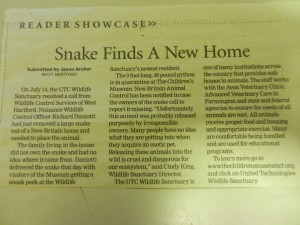 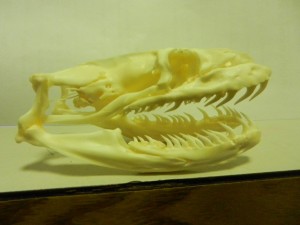