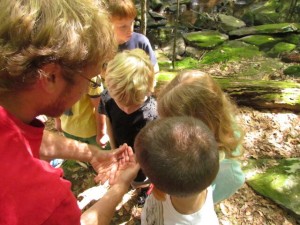 How did you get involved with Roaring Brook Nature Center?

Roaring Brook was one of the first places my parents took me when we moved to Connecticut. I’ve been going there for as long as I remember – I started with the summer camps and before long I was there for every nature walk and event they had on the calendar. When I turned 10 I started to volunteer as an animal feeder on weekends, and when I turned 16 I applied for a job as a summer camp counselor. I loved the way the people there had a deep interest in nature while being excited to share it with anyone who asked.

What are some of you earliest memories of Roaring Brook Nature Center?

I think my earliest memory of RBNC is going there for summer camp. I remember going to the pond and scooping up mud (and critters!) with a big net. I was really excited to find all of the animals living in the pond that I had never seen before, and it was a great excuse to get muddy!

What jobs have you held at the Nature Center and Museum? 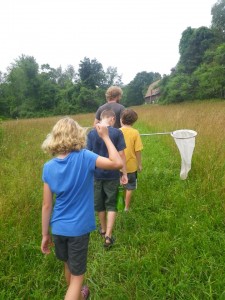 What jobs haven’t I had? I started off as a summer counselor at RBNC, basically an extra set of eyes in the room. It was a pretty natural progression into co-teacher, where I was more responsible for doing animal demonstrations and planning some activities. After a few years of that I was a head teacher, in charge of planning each week of camp for the grade 2-3-4 program.

Outside of camp, I have been part of the animal rehabilitation program. I have given animal demonstrations (both at the nature center, the museum, and in schools). I helped build and set up exhibits at the museum. I painted rooms. I fixed things when they broke. I’ve been part of many of our events and fundraisers. It has been a great experience getting to do such a variety of jobs!

At the Museum I sort of fell into the role of Facilities while we were in between employees, but I also worked as an educator and camp counselor. I was called on to help put together a few exhibits, including Puzzled?

What was your favorite part of those jobs?

Hands down, my favorite part of these jobs has been interacting with people and sharing my knowledge with them. I’ve always loved nature and it has been a privilege to pass on what I have learned with new people, both young and old. Nothing makes me happier than seeing someone’s eyes light up when I show them something new. It’s especially rewarding when I see the same people coming back time after time. There are people that I first taught when they were in kindergarten that have stayed with us for years and years. For me, knowing that I have had an impact on how people see the world has been the most important part of my work at RBNC.

Jay Kaplan is celebrating 40 years as the Director of Roaring Brook Nature Center. How was he influential to your experience there?

From my point of view, Jay is an inseparable part of RBNC. I was so excited to start the “big kid” camps and go on field trips with him, and not a single thing has changed. Jay is not only a colleague and mentor, but a friend. Some of my favorite memories have been spontaneous weekend trips across the state to go look for a dragonfly (or try out a new burger place!).  It’s impossible to spend time with him and NOT learn something. He knows so much about so many things; he can go seamlessly from explaining how to properly hold a hawk to a history lesson about a particular tree. What makes Jay special is that he doesn’t just know all of these facts, but he is a fantastic teacher and is able to captivate any audience you could throw at him.

Tell us about one of your favorite programs at Roaring Brook.

Chasing Dragons is one of our most popular summer programs. It is geared for a slightly older age group than most of our programs, and is an amazing opportunity. The focus of the class are dragonflies and damselflies. We take participants all over the state in search of rare species, getting hands on in a huge range of habitats. This program is a unique experience. We cover many issues facing these insects, focusing on how they are affected by human activities. There are chances for new discoveries – every year we manage to set county records, allowing campers to get their names “in the books”!

This class is very special to me – I was a camper the first year it was run. I instantly became fascinated with dragonflies, an obsession that has never ended. I began to spend my free time in search of rare or exciting dragonflies. This passion is a huge part of who I am, and has connected me with some of my closest friends. 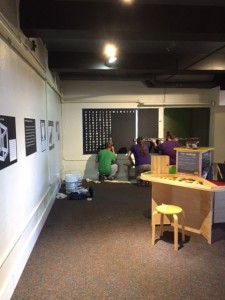 Working hard to put the finishing touches on the Puzzled? exhibit

Tell us about putting together the Puzzled? exhibit at the Museum.

Puzzled? is an awesome exhibit – it’s just as entertaining for adults as it is for children! Solving the puzzles pushes kids to be creative and think outside the box, something that is vital for intellectual development. It is also very hands on, which is really important for children that might learn best by “doing”.  There is also a lot of background information and material that will appeal to adults. Plus, let’s be honest. It’s hard to resist a good puzzle!

Putting together Puzzled? was a great experience for me. I was part of the project from beginning to end and it was incredible to see the exhibit go from ideas to plans to reality. I was most directly involved in the execution: painting the room, building components, and bringing everything together. I really enjoyed working with everyone and seeing what they had to bring to the table. It really required everyone to cooperate and it was great to see how different people approached the same problems.

What are you currently up to?

Right now I am at University of Massachusetts, Boston for graduate school. I’m studying kelp forests and how they are affected by nearby cities. Kelp is so important for so many reasons and we need to understand what it will take to protect and preserve it! 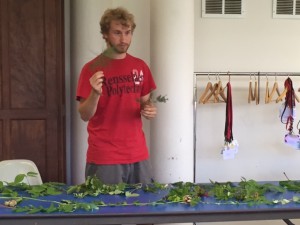 Teaching the Museum camp how to survive in the wild during Survivor Week in the summer.

I want to be a teacher. I’d like to formally instruct at the college level while being involved in outreach to the public. A huge part of my project involves communicating science to the community, something that has been a part of my life since I first visited RBNC all those years ago.

And finally, pretend like you are writing in a birthday card to Conny—what would you say to him?

Whale hello there! I heard it was your birthday and wanted to say thanks for 40 great years! You’ve really made a splash and I know a lot of people have really enjoyed your company. Since your arrival you’ve helped inspire people to learn more about the world around them by being an unforgettable part of the museum.

Have a whale of a good time!
Isaac