Hurry! Spineless Wonders will be leaving TCM after the end of August! 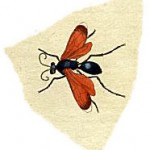 discover just how unique they truly are. Learn what makes an animal an arthropod, discover their unique adaptation to a multitude of environments and watch as they exhibit their abilities to camouflage, defend and even fly.

Spineless Wonders is now open in our main exhibit hall. Featuring arthropods from around the world, these creatures vary from the strikingly beautiful to the creepiest of crawlers. Arthropods are a diverse group of animals that include insects, spiders, crustaceans, millipedes and centipedes. And now, these spineless wonders are at The New Children’s Museum.

Here’s some more information about our latest residents: