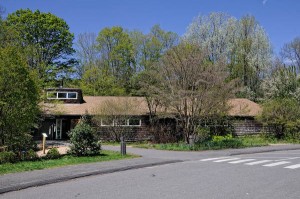 Roaring Brook Nature Center was founded in 1948 by Canton resident Una Storrs Riddle and was originally known as the Canton Children’s Nature Museum. In 1964, as a result of a bequest to the State of Connecticut, the adjacent 100-acre Werner Farm became available to the Nature Center as a wildlife sanctuary and outdoor classroom. A new building in 1966 provided larger exhibit space and allowed for expanded programming opportunities. In 1973, the Nature Center became affiliated with The Children’s Museum (formerly the Science Center of Connecticut), providing members with a wider range of programs and services for all ages. A large renovation was completed in 2018 to provide an additional classroom, new front entrance, wildlife rehabilitation clinic, turtle ponds, and bird of prey enclosures.