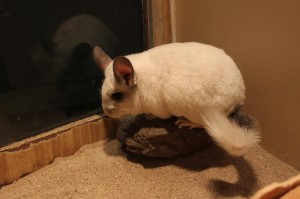 Lacey arrived at The New Children’s Museum on April 9, 2011. She was estimated to be about 3 years old when donated. Unlike most chinchillas, who are all grey,  Lacey is pure white with grey ears. Her unique coloration is a product of being bred in captivity. One reason for the captive breeding of chinchillas is for sale in the pet trade, the other purpose is to raise them for their fur to be used in the fur industry. Chinchilla coats were once very popular articles of clothing, unfortunately it took several chinchillas to make a single coat and as a result they almost went extinct in the wild due to poaching. When Lacey arrived she came with 5 other chinchillas who were all rescued from a fur farmer who was breeding them to be made into coats. Homes were found for the 5 other chinchillas, but Lacey remains at the museum to be used for educational programming.