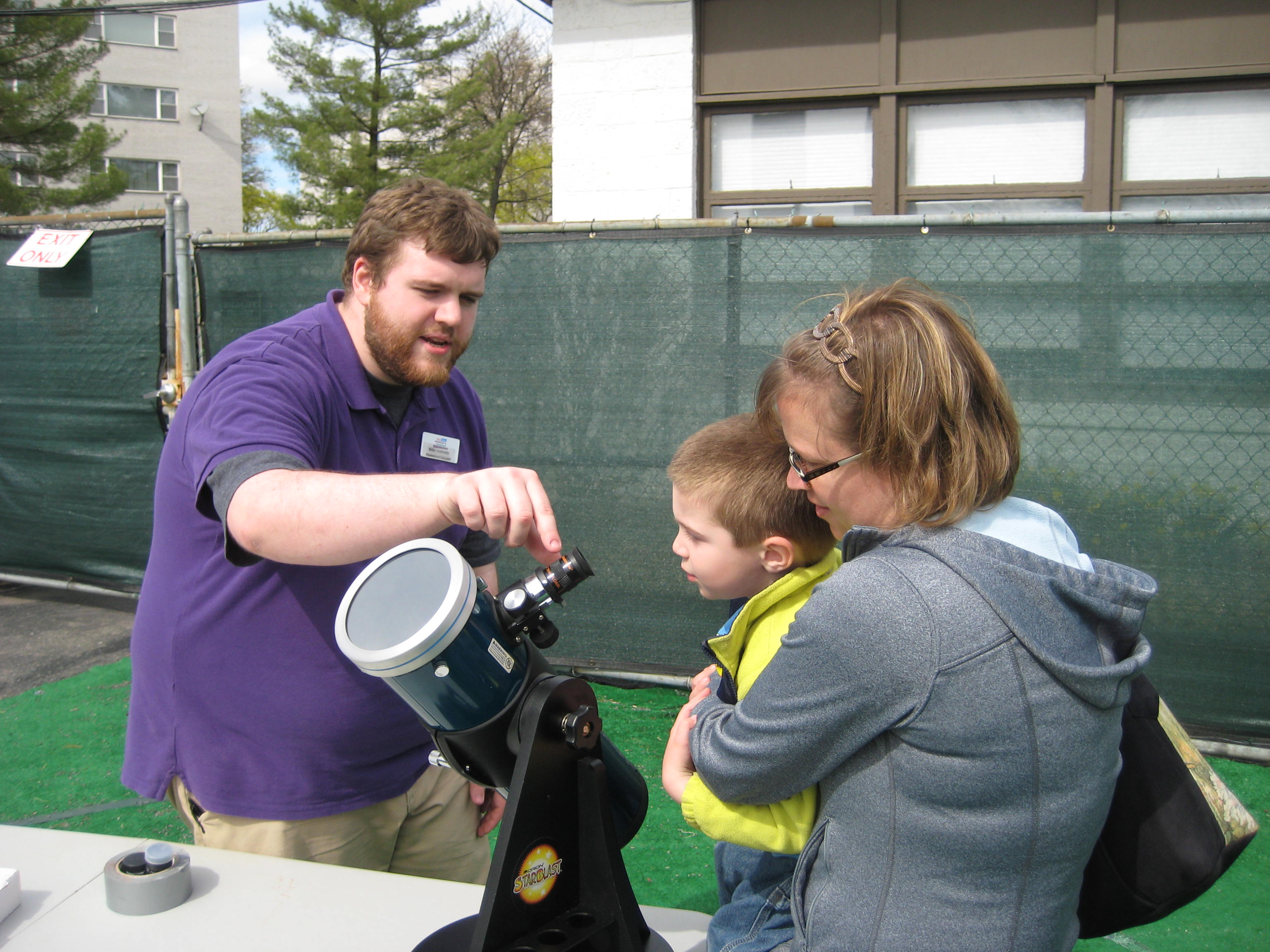 Why did you first apply for work in the Planetarium?
I applied to work at the Planetarium because I wanted to teach people about outer space. After school, I thought that maybe I would go back home and get a job teaching in that planetarium I visited when I was a kid. Of course at that time there were no job openings, but I kept checking. 3 years later, there was finally an opening for me, so I applied.

What other roles do you play at the Museum?
In addition to working in the planetarium, I’m also the museum’s Technology Coordinator, and an Educator.

What is your favorite part of working at the Museum?
My favorite part of any of my roles here at the museum is getting to see that spark in a child when they realize that the universe is so much bigger, and weirder, and more awesome than they’ve ever imagined.

What’s the weirdest thing that’s ever happened to you at the Museum?
At the end of some of our classes in the planetarium, we ask the children if they have any questions. That’s not unusual, but I throw it open to any questions about space at all, because I know that some kids are going to have picked up on some weird little idea or fact they heard some place that they really want to know more about, like black holes, that their teachers may not be well versed in and maybe don’t have time to cover in class. So as you can imagine, sometimes the topics can get really far afield from the show we’ve just watched. Once, the group must have been about 4th grade level or so, I started getting questions about alternate universes. Could they exist? Do they exist? Could there be another me in another universe that is almost exactly like me, but just a tiny bit different? So there I am, standing in front of this class, breaking down the latest in theories about the multiverse and the many worlds interpretation of quantum mechanics, things that are at the very limits of our understanding, and trying to accurately convey that to a 10 year old. That was maybe the most surreal class I’ve taught here.

Do you have any early/childhood memories of the Museum/Planetarium?
When I was younger I lived in Pennsylvania, but my grandparents lived in West Hartford. Sometimes when we would come up to Connecticut to visit, we would visit what was then called the Science Center of Connecticut. I have distinct memories of my dad taking me into the planetarium to see a star show, and what I learned there has stuck with me all my life. That’s where I learned how to “Arc to Arcturus, Spike to Spica.” I also remember learning a fact that completely blew my mind as a young kid: Red stars were cooler than blue stars. It totally went against what I had learned about the world, blue was always associated with cold. But it was totally wrong when it came to the stars.

What would you say to encourage a child who has an interest in space/solar system? 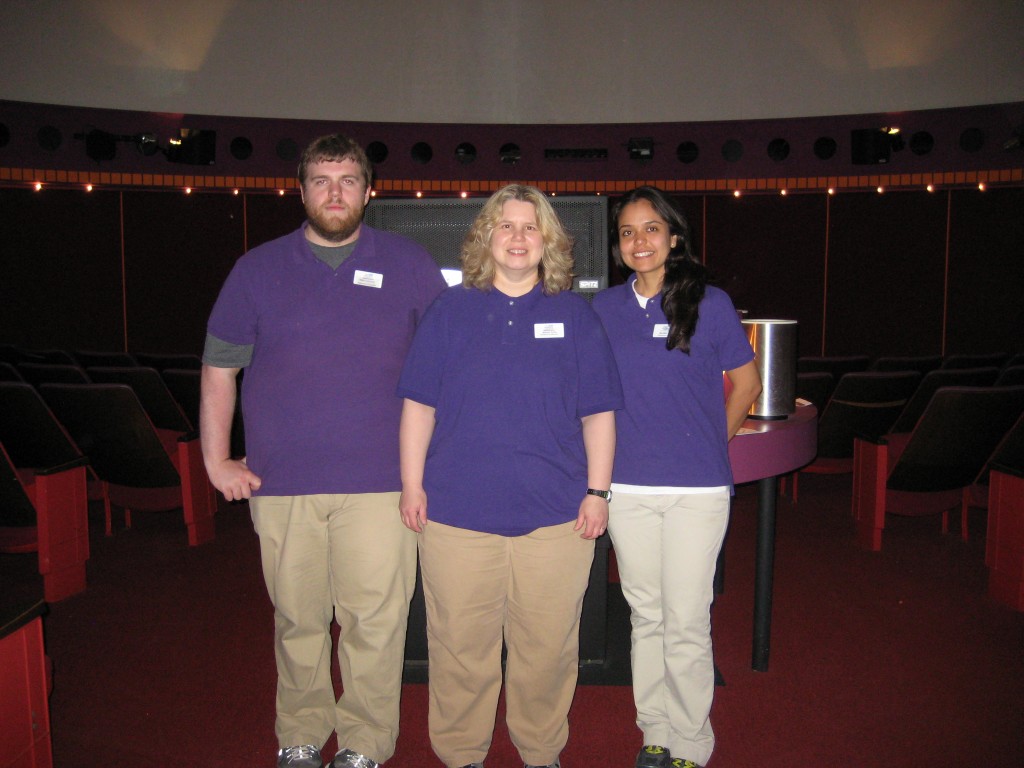 The Moon has the same land area as the continent of Africa. Humans have explored its surface for only about 3 days. We had no idea what Mars looked like up close even 50 years ago. The worlds Uranus, Neptune, and Pluto have each been explored by only one spacecraft. The giant planets Jupiter and Saturn are swarmed by a host of moons, some of which seem to have oceans filled with more water than all the water on Earth; what if there’s something living in those oceans? Sometimes it feels like we already know everything, that everything has already been discovered. That couldn’t be more wrong. Our universe is so much bigger and grander than we can imagine, and there are so many wonders as yet undiscovered. Right now is the best time to be an explorer.

What current science events do you think are important for kids to know about?
On July 14, 2015 the New Horizons spacecraft flew past the dwarf planet Pluto, the first and only space probe to do so. It flew so close to Pluto that if it were flying by the Earth its cameras could pick out individual ponds on the surface. New Horizons is so far away from the Earth that it’s only just now that all of the pictures it took of Pluto have made it back to us. Those pictures aren’t just beautiful images of a world never seen before, but they have also completely defied our expectations and are rewriting the way we think about planets. And the best part about all of this is that all of the images are freely available through NASA’s website. You can go to NASA.gov right now and be among the very first people to explore a brand new world. I think that when we talk about science, especially with younger children, we can make it seem like science is this static, unchanging collection of right and wrong facts, instead of the dynamic, evolving process through which we learn about our world that science really is. There might not be a better way than showing kids a brand new picture that proves so many things we thought we right so completely wrong.

What’s your favorite planetarium show?
My favorite shows to put on are our live sky tours, where we get to look at tonight’s night sky and see some of the constellations, and planets, and other wonderful objects in our universe. But my favorite show we ever did, was a special live show for New Horizon’s flyby of Pluto in July 2015. I got to show the audience brand new pictures of Pluto that nobody had ever seen before, and we walked through them together. We were exploring Pluto as it was happening. I’ve always been very proud of the way those shows turned out.

And finally, pretend like you are writing in a birthday card to Conny—what would you say to him?
Happy Birthday, Conny! You’re out of this world!