From Whaling to Whale Watching: Saving Ourselves in the Process 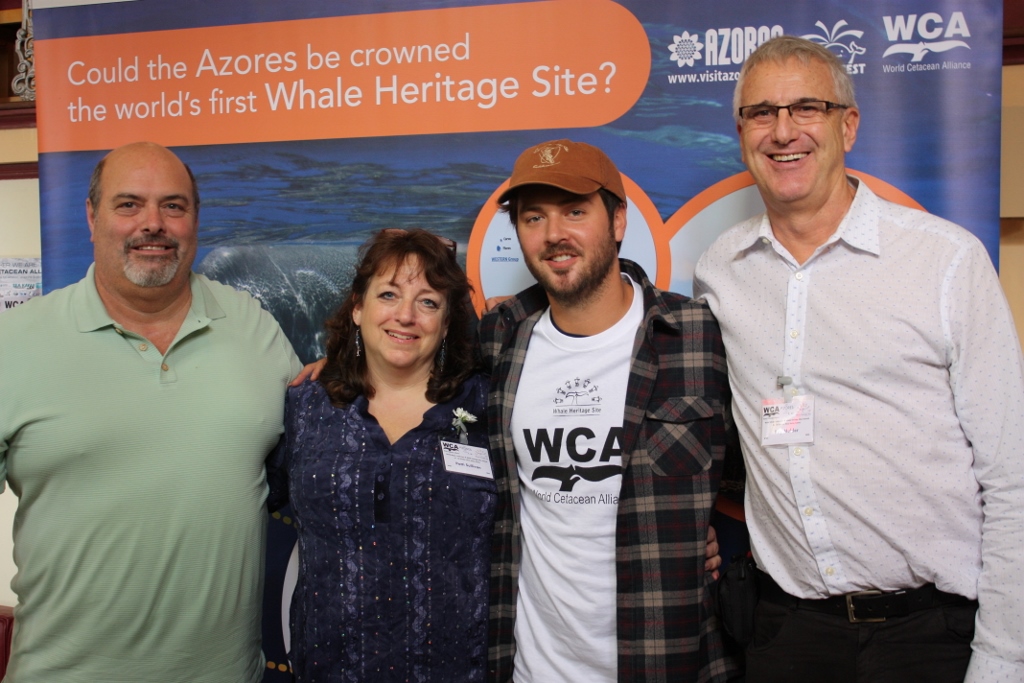 Cetacean Society International (CSI) is a proud Founding Partner of the World Cetacean Alliance (WCA), the world’s largest partnership working to protect whales, dolphins and porpoises (cetaceans), representing 70 Partners in 35 countries worldwide and expanding rapidly. Through cooperation, the Partners of the WCA work to conserve and protect cetaceans and their habitats in the world’s oceans, seas and rivers, to ensure their continued health and survival.

WCA’s second World Whale Conference was held in October in the Azores, Portugal’s Atlantic Hawaii, in partnership with the Azores Promotion Board. CSI Board members Patricia Sullivan and Paul DiGangi, whale and dolphin experts, charities, and whale watching companies from across the world were warmly welcomed to the island of Faial to discuss how the World Cetacean Alliance and its Partners can “work together to effectively protect cetaceans through four global programs: 1) Stopping cetacean captivity, 2) Responsible whale and dolphin watching, 3) Threatened  and data deficient species (with an emphasis on beaked whales), and 4) ghost fishing gear and entanglement.”

As part of the conference, WCA launched the first Whale Heritage Sites summit; the Azorean islands offered a perfect backdrop because of their robust link to the ocean and remarkable success transitioning from whaling to whale watching.  The Sperm whale was the primary whale hunted in the Azores, and tributes to the whale are everywhere on the island of Faial. “Whale Heritage Site status will be designated to destinations that celebrate the cultural importance of whales and dolphins by engaging communities and tourists with the arts, science, music, education and events, and maintain the highest standards of responsible whale and dolphin watching.”

On the first day of the Whale Heritage Sites summit, Filipo More Porteiro, regional director of Sea Affairs from the Azores government, explained how the history of the Azores is intertwined first with the whaling industry, and now with whale watching. Whaling heritage is remembered by locals with pride and affection, from the scrimshaw museum in Horta, the capital of Faial, to old whaling sites now visited by hikers and nature lovers. “Now the aim is to explore the biodiversity and celebrate its beauty,” said Filipo. Today the Azores is considered among the top 10 hotspots for whale watching worldwide, with 110 registered operators spread across the nine islands (total population 245,000).

Conference speakers celebrated successes in whale cultural experiences. Ian Rowlands of Whalefest in the UK shared his views of how such festivals give a chance to reach wide numbers of people – especially young people and those who would not normally engage with cetacean issues and activities. He told the story of running the hugely successful Whalefest. (CSI sent representatives for two years.) Rowlands pointed to the universal appeal of whales and added, “If we cannot get kids fascinated about whales and dolphins we might as well all give up.”

Following speakers on the first day of the Whale Heritage Sites summit, conference groups visited key cultural and historical sites on the island of Faial: an old whaling station that is now a museum, a boat yard displaying one of last whaling boats which are now used in regattas, a scrimshaw museum, and one of the country’s leading whale watching activities. The groups gathered interviews, recorded powerful images, and sought out rich and emblematic stories that would capture the essence of the Azores’ long association with whales.

The Azorean islands are being considered for the first Whale Heritage site, a credential that can be found nowhere else on the planet.

The connection to the emblematic Sperm whale and Connecticut’s CONNY (who turns 40 in 2016) is significant.  Connecticut celebrates the Sperm whale as its state animal, a move that was lobbied by CSI’s own beloved Dr. Robbins Barstow in 1975.  Like the Azores, our state’s heritage is also linked to whaling, and now to the celebration of cetaceans and the ocean. In the 1800’s Connecticut ranked second only to Massachusetts in the whaling industry. The Sperm whale is listed as vulnerable on the IUCN Red list.

Three countries continue to kill whales despite a worldwide moratorium established in 1982 and widely enacted in 1986; Iceland, Japan and Norway.  Iceland killed 155 endangered Fin whales and 29 minke whales during the 2015 season. On the first night of the conference, WCA presented a groundbreaking documentary about Iceland’s whaling, entitled Breach.  The film, created by Jonny Zwick, was premiered by CSI at The Children’s Museum in August, 2015.  After the Connecticut premier of Breach, Zwick conducted a fascinating forty five minute Q & A via Skype.  At the Azores conference, Zwick was present to introduce the film and participate in a lengthy and perhaps first ever Q & A in tandem with an Azorean former whaler turned whale lover, Noberto “Diver”.

Extraordinary alliances such as those between CSI and The Children’s Museum, and the Partners of the WCA clear a new path to cetacean appreciation, protection, conservation and stewardship of our planet’s fragile ocean treasures. As WCA’s Honorary President Jean-Michel Cousteau says, “Without collaboration we will achieve nothing more than a drop in the ocean.”